On Monday, July 5th, 2021, Rimac Automobili held a live event during which were announced a series of changes at the corporate level that represent historic milestones for the young Croatian company.

Mate Rimac, on the stage, revealed the birth of Bugatti-Rimac, a strategic Joint Venture between his company, now the leader in the super sports electric vehicles, and the long-standing high-end French automotive brand part of the VW Group.

The discussion began around 18 months back, and after a while rumours started to spread on the internet about VW selling Bugatti to Rimac, and Porsche simultaneously acquiring a higher stake in the EV automaker.

There are not many details about what went on behind closed doors, but on Monday the result of this discussion was finally revealed. So, let’s have a look at what are the deal’s implications and why it is important in this moment of the luxury automotive market. 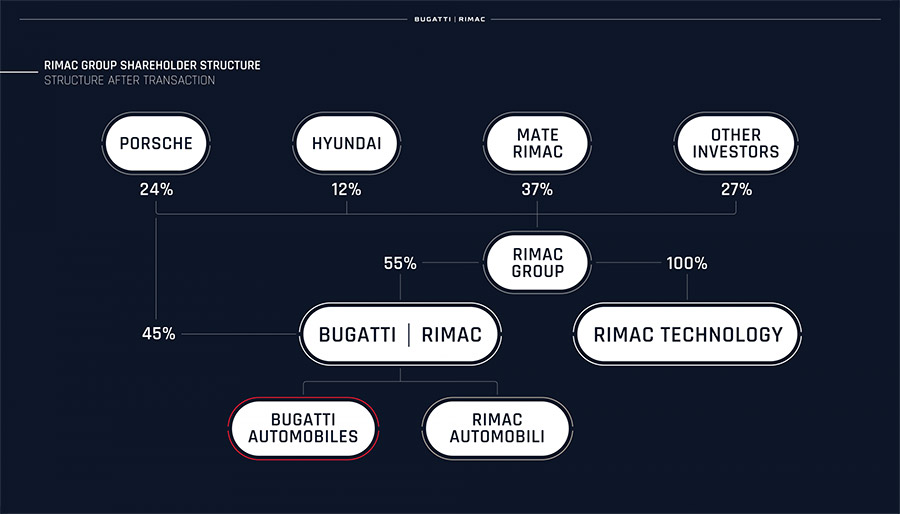 This is Rimac's updated corporate and shareholding structure as announced during the event.

From the top line, we can observe all of Rimac’s major shareholders, and there is no real surprise there. Mate maintains a 35% stake in his company, so does Porsche at 22% and Hyundai at 11%. The remaining 32% sees other automakers such as Kia, Chinese battery manufacturer Camel Group and more.

In the next row of the chart, things start to get more interesting. We see, in fact, the entity called Rimac Group now, where Rimac Automobili stood. The group then splits into two separate units that despite remaining distinct from one another, will maintain their synergies where necessary.

The first one is Rimac Technology. This division will remain completely under the Rimac Group, and independent. This is, in the words of its founder, the initial and biggest competitive advantage the company had and perfectly complementary to the automotive business.

He spoke frequently about how the technological know-how has been the real game-changer that allowed the company to flourish and establish itself as a major player in this market, before the car itself. Rimac’s current model Nevera, whose production is set to start in the coming weeks, is in fact, entirely produced in-house. This expertise in EV battery and drivetrain manufacturing, as well as software development its components’ management is what brought in the partnerships with Pininfarina, Aston Martin, Koenigsegg, and many more. Expertise that without the opportunity for economies of scale with these deals, would be extremely difficult to maintain with Rimac’s low production number.

Most importantly in this case though, this is also what initially captured the interest of Porsche and ultimately led to the present partnership.

On the other side of the graph appears the real news. Bugatti-Rimac. The Joint Venture between the two automakers should bring together the best of Bugatti’s century-old history and automotive heritage with Rimac’s unprecedented boost of innovation. 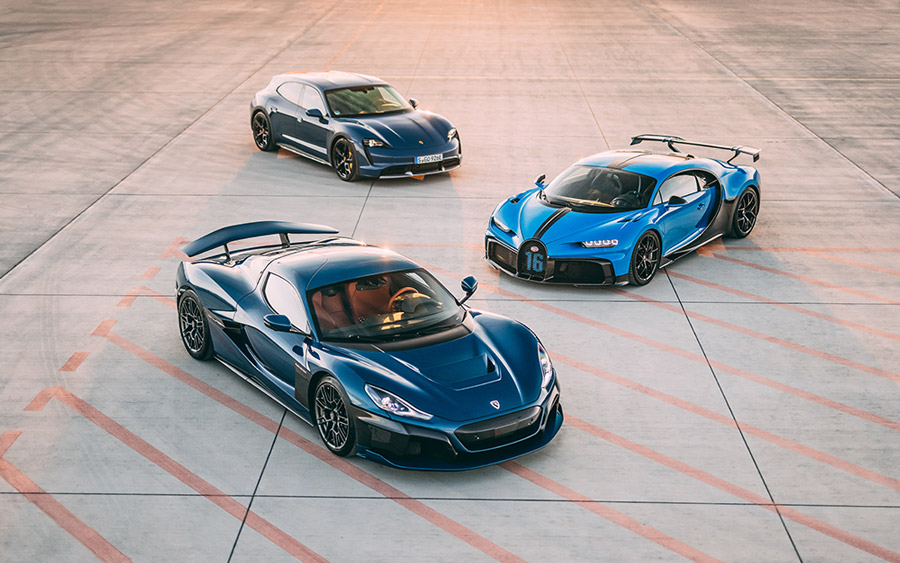 The majority stake in Bugatti-Rimac will also stay under Rimac Group with 55%, the remaining 45% will be held by Porsche. Both the divisions then will be run by Mate Rimac himself, who stays as the CEO of Rimac Group. Porsche will have a role in the company support as an advisor.

The mission is clear. To bring Bugatti into its new century and secure its future, but it doesn’t end there. While both Rimac and Bugatti will keep producing their own hypercars, at their own headquarters near Zagreb, Croatia and Molsheim, France respectively (except for EV-related components for both brands that will be entirely developed and produced in Croatia), the strategic JV will combine the companies’ R&D efforts and other areas of development.

Being under Porsche, naturally, the German automaker will benefit as well from a consistent know-how and technology transfer that will help the development of future high-performance electric models.

WHY THIS JOINT VENTURE IS IMPORTANT

The shift toward electric mobility is happening faster than many predicted. The reasons are many, not just restrictive Governments’ environmental regulations. On the customers’ side, the novelty, performance, and features enabled by digitalisation, connectivity, and OTA updates have created a stronger appetite for electric vehicles and they are changing the customers’ preferences. According to a survey by McKinsey 45% of current car owners will consider buying an EV as their next vehicle.

*Monday’s presentation participants. In order from the left, Oliver Blume, CEO of Porsche AG, Mate Rimac, Founder and CEO of Rimac, Lutz Meschke, Deputy Chairman and Member of the Executive Board Finance and IT at Porsche AG

An EY market research reported by Bloomberg, claims that by 2033 the EV market will be the dominant one. EV sales should outpace ICE car ones, by 2028 in Europe, 2033 in China, and 2036 in the US. Also, by 2045, their analysts predict that non-EV sales will account for less than 1% of the entire market.

This, even if in a different way, is happening in the luxury performance market as well.

A few days ago in Modena, Italy, home of some of the most iconic luxury automotive brands in the world, it was held the Motor Valley Fest. During the opening speech, McKinsey Senior Partner Gianluca Camplone reported some noteworthy forecasts.

When it comes to the luxury segment, the continued growth is ensured by a constantly increasing number of high-net-worth individuals, especially in the APAC region. Also, as discussed when addressing the transformation of Luxury and Super Sports cars into consumer electronics, with the difference in performance between brands and models flattening and the loss of that ‘emotional factor’ with the electric drivetrain, the differentiating factors and value proposition for each brand will have to change or at least expand, becoming more experiential.

Bugatti’s 100-plus-year long expertise and knowledge of its customer base will play an important role in this development and can definitely benefit Rimac too.

Most importantly though, the market analysis reported the growth forecast of the hypercar market and its shares by powertrains.

First is the overall growth of this segment, which signals a trend in the market where super-wealthy clients look increasingly for rarer products, as seen with the trend in one-off supercars which almost always exceed the pricing of the average hypercar.

Secondly, the fact that by 2025, over 60% of the entire segment will be represented by electrified models, divided in half between hybrids and full-electrics. This is the most important piece of information. In this context because it gives an image of a changing sector, even in the niche where up until a few years ago it seemed impossible to have a car without a gearbox and with a motor that does not make any sound.

In turn, it is easy to understand the benefits and the importance of the new Bugatti-Rimac JV, where the French automaker does not have synergies with other brands of the group like Lamborghini and Bentley have with Audi and Porsche, but still needs a change of pace when it comes to electrification. This partnership gives Bugatti access to world-leading high-performance electric technology. Additionally, both the brands pricing-wise are similarly positioned, differently from the other companies in the VW Group.

For now, it seems like the change will not be sudden for Bugatti anyway. The French automaker will also pass the hybrid intermediate step. But the backing of Rimac puts it in the best shape possible to go through this transition. As for Rimac, apart from the joint R&D efforts, the access to Bugatti’s experience in the sector, services, and CRM, will surely enjoy increased brand awareness and most of all reputation that will solidify even more its position as a world’s leader.