EV Market Growth 3 years later: China and the rest of the world

A while back, I wrote an article drawing the situation of the Chinese automotive market and trying to frame the buzz around the new energy vehicles growth in the world’s largest automotive market.

You can find it here.

The observation started from different media outlets discussing the rapid growth of Chinese automakers in the EV segment, while western companies were being left behind. The investments and specific development areas however gave back a different picture. Three years later, some trends have remained unchanged. The graph below expands the data gathered in the previous article about R&D spending by the different major manufacturers in Europe, the US, and Asia. 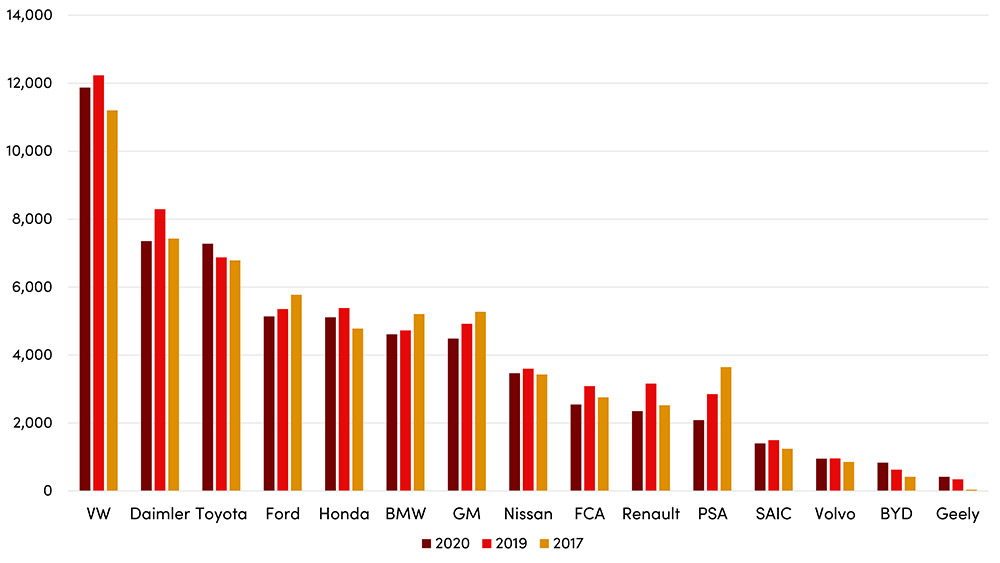 Despite the growth of major players in China that are even starting to approach foreign markets, European, Japanese, and American established companies are the ones still spending the most in this crucial phase of the industry. Naturally, the mere size here is the most important factor for this. At the top of the chart are in fact all the world’s largest groups, with VW still towering over the others. However, while the majority gradually increased their spending between 2017 and 2019, 2020 shows clearly the negative effects of the pandemic. Except for a few, every company reduced quite significantly the R&D spending.

Toyota is the major exception to this, growing very close to Daimler in terms of investment size in 2020. Chinese automakers too have either further increased their expenses or only reduced them slightly, which might be a consequence of China’s quicker return to full-time activity after the lockdowns, even if they all start from a much lower basis.

Naturally, the vast majority of such investments are going into ACES technologies (autonomous, connected, electric, shared). In the last two years, every major automaker released a revised business plan focusing its resources in this direction, like VW’s ‘New Auto’ strategy, or Daimler’s ‘Ambition2039’.

After all, the shift is happening faster than expected. A forecast by Meticulous Research reported by Bloomberg claims that the EV market is expected to reach a $2,495 billion size by 2027 at a CAGR of 33.6%. As for the sales figures, the CAGR would be 21.7% to reach by the same year a total of 233.9 million vehicles.

Another observation that could be significant is that the two major American automakers, Ford and GM both gradually decreased their investments in 2019 already, before the pandemic. This could indicate a more conservative approach, considering also that the automotive industry has been slowing down since 2017. 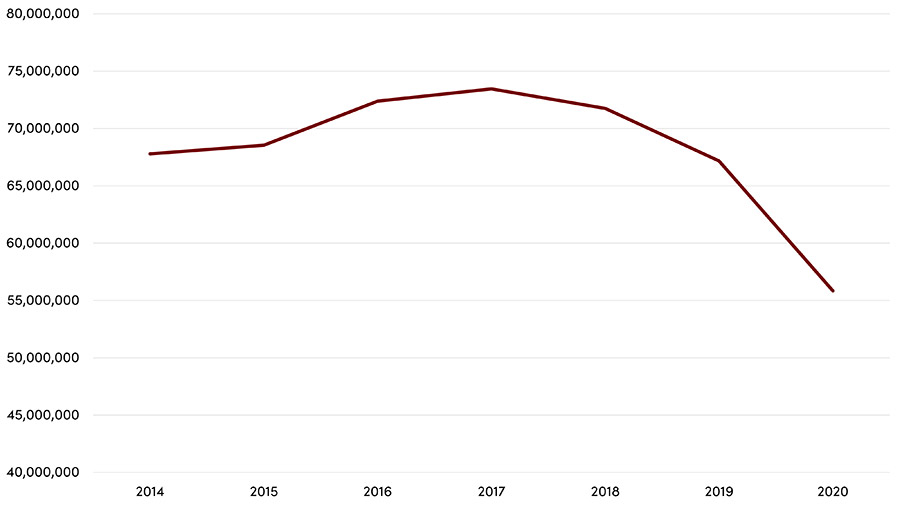 American companies slowing investments could also be the reason for a sluggish EV market development in the US, and for the dominance of Tesla in America. The major American competitor to Tesla in terms of sales right now in fact is the Chevrolet Bolt, which was only introduced at the end of 2016 and despite the lower price, is still far from the best-selling Model 3 and Model Y.

As for Ford, it released its first proper EV, the Mustang Mach E, only in the second half of 2020. And with a starting price of around $43,000 (£31,000), it will compete directly with Tesla’s new crossover Model Y. Reviews so far have been enthusiastic, and this first year will be crucial to see if the direction the company took is the right one. 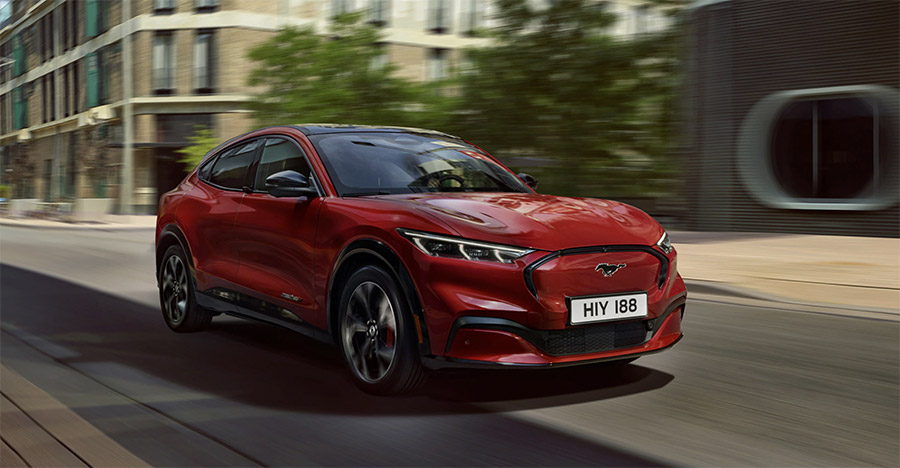 THE CHINESE MARKET (VS THE REST OF THE WORLD)

As expected in 2020, more EVs were sold in China alone than in Europe (following more closely) or the US, accounting for almost 50% of the EV sales in the entire world.

Despite the differences at the provincial level, the government’s approach is changing.

In a notice of January 2021 (关于进一步完善新能源汽车推广应用财政补贴政策的通知》的解读), the Ministry of Industry and Information Technology of the People’s Republic of China, claimed that the subsidies that were supposed to be phased out in 2020, will be extended into 2022, and so far have promoted a partial recovery of the market with growth in the EV segment. But, a reduction of 10% (initially 20%), applied differently depending on the vehicle’s class and characteristics, will remain to try and consolidate the new energy vehicles’ market.

Also, back in 2019, for the first time, China allowed an automaker to enter its domestic market without a Joint-Venture with a local company. The first one was of course Tesla, that in the meantime established its Gigafactory in Shanghai and now leads the market with the Model 3. Despite this though, the Chinese Government ‘bet’ on its own industry seems to have paid. The fiercer competition surely helped the growth of the market, but much like in 2017, with the exception of the Model 3, Chinese automakers are still dominating their domestic market when it comes to EVs.

*Prices are all converted into GBP (£)
*The prices indicated represent the entry-level trim for each car, which in many cases can vary significantly increasing the car’s performance or battery range offered.

Western companies maintained their Joint Ventures even if the policy relaxation has allowed for different market entry options. Executives said previously that it would seem too risky to approach the Chinese market alone. This might actually be advantageous, for two main reasons. First, with Chinese companies outselling them, the current situation represents an opportunity for foreign automakers to gain better insights into the consumers’ preferences, and have the backing of a local player in general. Secondly, as a proper hub for EVs development takes shape, western manufacturers that have numerous R&D centres in China can keep taking advantage of innovations, and knowledge spillovers.

The table of the 10 best-selling EVs in China, Europe, and the US paints an interesting picture. The trends are clearly quite different in the three regions. As mentioned earlier, in terms of sales China leads the way, followed by Europe, and third, comes the US distanced by quite a margin. Looking at the average price though, the order is the opposite. In America, Tesla is leading with all its 4 models which have a premium positioning, in the top 5, and right after, come also Audi E-Tron and Porsche Taycan, which both have similar pricing if not higher in certain configurations. Europe has more variety, with more automakers competing actively, and a wider choice of medium-range to up-scale or luxury models available.

China records a prevalence of small, cheap, electric city cars. The conclusion is not straightforward though, because in China other factors like the license for the car ownership, and the changing subsidies affect the purchase choices. Nonetheless, price sensitivity more than the battery range seems to play an important role there. Compared to the 2017 analysis also, appears a renewed interest for premium EVs, as not only Tesla Model 3, but high-end electric SUVs by Chinese brands, like Nio ES6 and Li Auto or LiXiang One (理想One)  appear on the list as well.

The forecasts from a few years back that saw Chinese automakers outpacing western ones did not occur. Nonetheless, Chinese companies still dominate the domestic market with their unique offering. Whether is a small and incredibly cheap EV, or a luxury SUV with unique features, only Tesla with the Model 3 managed to outsell them. Overall, the EV market growth is consistent now. Despite the pandemic, companies invest with strategies focusing on ACES development, and each region presents different challenges and questions when it comes to customers’ preferences. For now, in fact, domestic automakers seem to have a clear advantage in each country over foreign ones. Maybe due to financial and tariff-related issues or familiarity, or because each brand interprets better the needs of “their own” customer base. 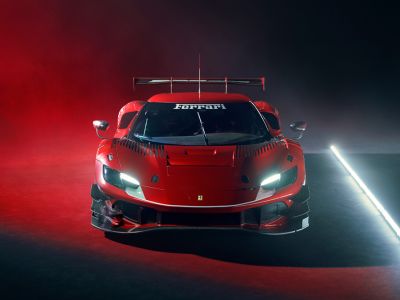