In 2020, after a generally positive start of the first quarter, the world has been hit by the proverbial Black Swan. The pandemic changed profoundly our lives and, in many instances, has accelerated dynamics that were already developing in numerous industries.

After the virus diffusion, the outlook for the automotive industry got extremely negative very quickly. Trade decreased by 8% y-o-y in Q1. In April along instead the loss reached 49% compared to the previous year. In Europe, the overall number of new vehicles’ registration was down 38.1% (UNCTAD).

The most severe consequence of the pandemic was probably the shutdown of production plants that lasted several weeks. In the UK, according to Bentley CEO Adrian Hallmark who talked with Bloomberg, these weeks only cost the automaker over £7 million. 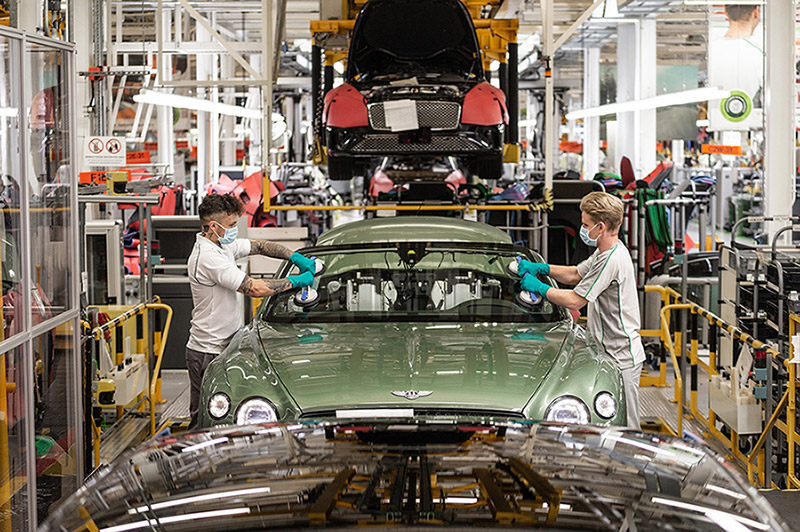 This period forced several automakers to undergo significant reorganisation. UK automakers Bentley, Aston Martin (already going through a difficult time), and McLaren particularly, had to lay off a considerable share of their personnel. Around 1,000, 500, and 1,200 workers respectively out of relatively small workforce compared to regular automakers. Additionally, many companies employed part of their resources to help their respective local or national public health system providing medical equipment. 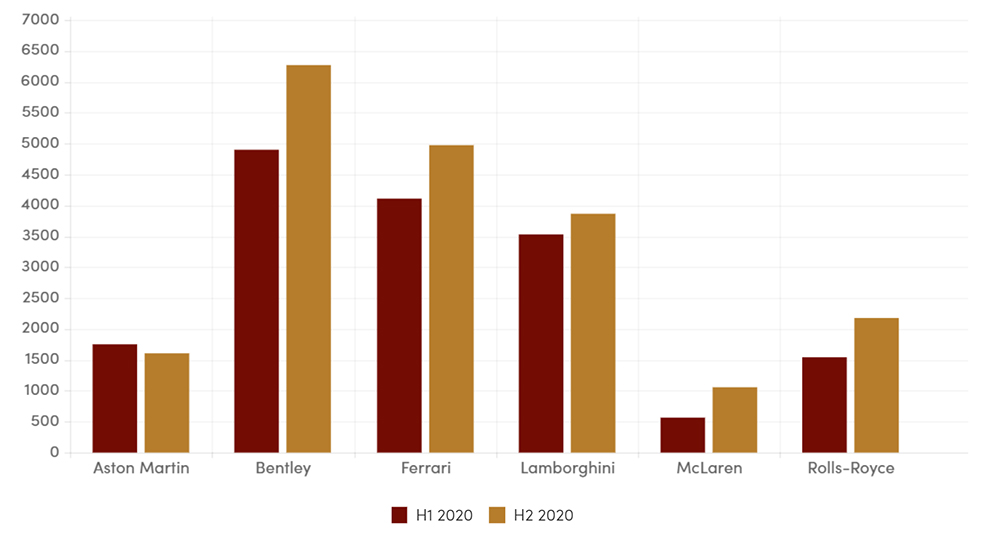 The recovery continues in 2021. The vast majority of automakers (with a few who still haven’t published official numbers) reported positive results.

In the luxury segment, results are not just positive, but Bentley, Lamborghini, and Rolls-Royce have all reported record sales for their first quarter, growing respectively year-over-year by 40.2%, 24,6%, and 61.8%. Ferrari too has increased its deliveries to 2,771 units, a 1.2% more compared to 2020. This might seem less impressive, but it must be considered that its sales were already in line with 2019, the best year of the company, with deliveries that exceeded for the first time the 10,000 units. And surely Ferrari does not want to increase that volume massively incurring the risk of brand dilution.

On a separate note, Aston Martin, which was already going through a difficult time, instead made an even bigger step forward. The British automaker (which, must be said, started from a significantly low base volume in 2020) reported a +134% with 1353 cars sold in Q1 2021. 746 of those were SUVs. So, the DBX introduction seems to have had the effect it was supposed to have. Slightly more concerning, however, is the fact that almost like at Lamborghini, the other segments have remained almost stagnating, even though this is most likely due to the current line-up lifecycle and thus expected by Aston Martin’s decision-makers. The second rebirth could come with the production and delivery of the much expected Valkyrie, Valhalla, and Vanquish Vision. 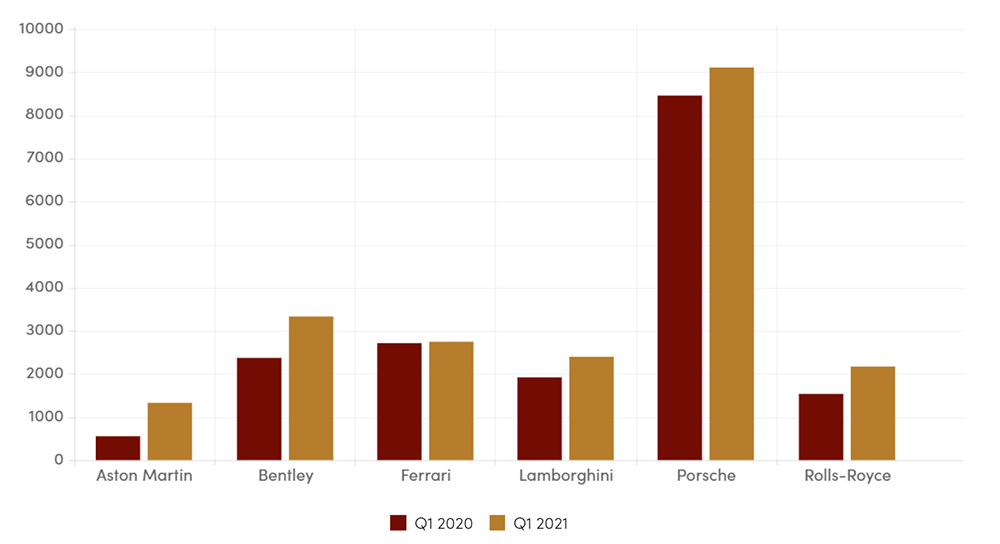 *Porsche's data include only 911 sales

These results are especially positive if we consider that the biggest hit from the pandemic came, as specified before, with the shutdowns that generally happened in Q2. So, in most cases, the sales numbers were not affected by the virus outbreak at the time in 2020.

The trend however is not limited to the top-end of the market. Numbers reported by OEMs in the luxury and premium segment, right below the ones described before, tend to show similar if not even better results. The overall segment experienced a 29.6% growth compared to the still noteworthy 20.1% of the top luxury niche.

More modest instead is the result in the low to mid-price range passenger car market, where the overall growth among the reviewed brand is 8.1%. 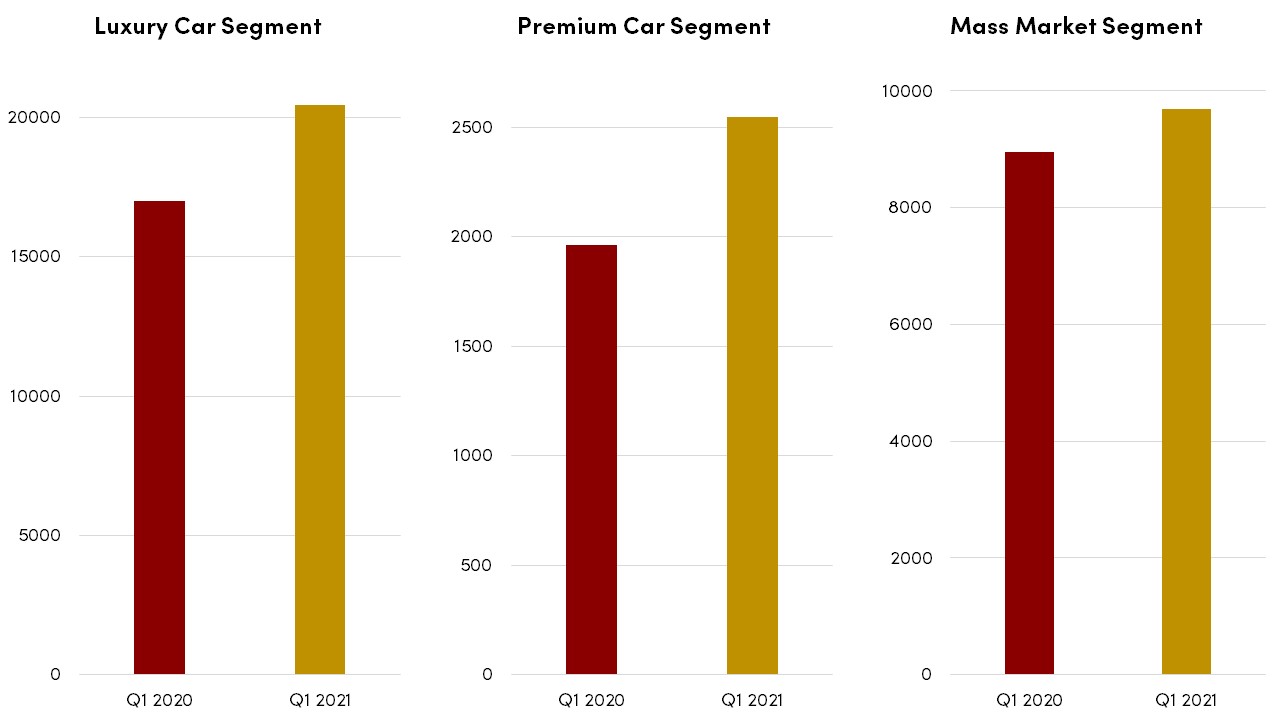 WHY THE IMPRESSIVE GROWTH?

The reasons for this significant progress can be various. First of all, the luxury automotive market was already going through a 5-year continued positive momentum. So, the appetite for luxury vehicles might have remained consistent but a part of the purchase decisions delayed due to the Covid-19 impact. This along with the delay caused by industrial plants shutdowns resulted in an overall 11.39% sales decrease in 2020, which was still lower than the one recorded in the mass-production market at -14.59%.

Luxury car manufacturers’ wealthy clients are more likely to have a more resilient professional position as well as the possibility to take advantage of the opportunities created by this crisis in real estate, finance, and other sectors. Meaning that their customer base disposable income has probably increased on more than one occasion.

A significant part of this positive Q1 is accounted for by orders and sales coming from China. In 2020, it was the first country in the world to return to almost regular activity, and a consistent number of orders came from there. Despite the US still being the largest national market for almost all the companies in this niche, China keeps on gaining importance. Among the percentages reported in the Financials section, China always accounts for a large share of the APAC region sales. This is particularly true already for Bentley and Porsche, but other automakers are increasing their sales share in Asia. The +298% sales growth for Aston Martin in the APAC region is proof of that.

It is China during its period of rapid growth that indirectly helped to contain the consequences of the crisis in 2008. Its fast recovery early in 2020, while the rest of the world was gradually shutting down, benefitted the luxury automotive industry too, and with the country generally, way ahead in the population vaccination process, this remains true in 2021. Bloomberg reports new Lamborghini CEO Stephan Winkelmann's words saying that in 2021, China is projected to become the second-largest market for the Italian automaker.

Another interesting point made in the same article refers to the technological development applied to the purchasing process. As highlighted previously in the Review of the new Customer Journey in Luxury Automotive, digitisation is a crucial part of the equation and offers a number of new opportunities. Integrations of connectivity, augmented, and virtual reality through engines like Unreal are a great example of what technology can do for automotive marketing, customer service, and data-driven development. The need to find alternatives to the regular process through dealerships helped to streamline the services and improving efficiency while eliminating redundancies.

Furthermore, the customer service in luxury automotive, thanks to its more concentrated and personalised characteristics, offers even more varied and easier to implement opportunities compared to that of a high-volume automaker.

Finally, a potential psychological consequence of this period is that people might have attached a renewed value to private vehicles, given the restrictions and insecurities regarding crowded places and public transportation. In this regard, the improved experience that a luxury vehicle offers has probably gained such special importance that those who have the opportunity to enter this segment, ultimately decided not to pass on it.