In its latest report, Porsche confirmed the record results of the first half of 2021. Despite the ongoing chip shortage that is affecting the industry with production and logistics bottlenecks, Porsche minimised the delays by retrofitting vehicles’ missing parts.

Some in the factory, others once delivered to the dealers, some even post-sale. So, on October 15th press release Porsche confirmed 217,198 deliveries, up 13% on the previous year.

According to Member of the Executive Board for Sales and Marketing at Porsche, Detlev von Platen, flexibility in facing all these challenges has been key so far and will still be in the coming months.

In the picture below there are two clear winners. One is the SUVs Macan, selling 61,944 units and significantly improving on the previous year. Cayenne tops the sales at 62,451 cars delivered, but with a slight decrease over 2020. This is probably due to product life-cycle, but potentially also because Porsche’s electric line-up offers an appealing alternative. The second winner is in fact the Taycan family. These have reached an 28,640 units, up an impressive 161.7% on the same period in 2020. Naturally, a big part of this result has to be due to the addition of the Cross Turismo iteration. Along with being a more practical version of the regular Taycan, a similar pricing to Cayenne for all the trim levels, and the significant incentives in different countries (i.e. rebates for both private and company vehicles in the UK, or China where according to 工业和信息化部 – Ministry of Industry and information total incentives reached CN¥33 billion), are factors that are pushing Porsche buyers to opt for the EV instead of the traditional ICE.

The big news here though is that, so far, through 2021, the Taycan has surpassed the 911. While is not the first time over a single quarter, it is the first time over a YTD period. This however is not to say that the sports car did bad. Its sales increased by a sizeable 10.1% in 2021, making it the fourth model in the line-up.

PORSCHE SALES BY MODEL AND GROWTH % YOY (JANUARY TO SEPTEMBER 2021) 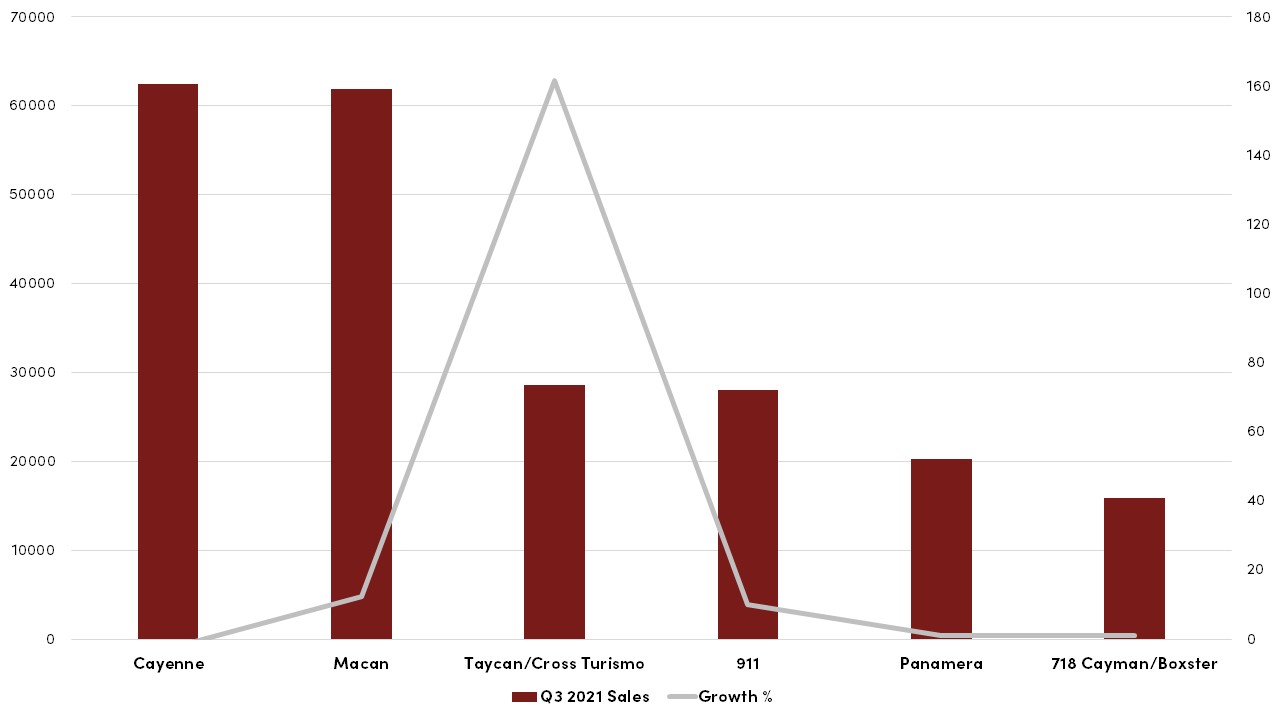 From a market share point of view, it is also interesting to observe how the regional markets are recovering from the 2020 hit. The most striking improvement has been recorded in America with a 29% growth (the US alone has increased its sales by 30%), followed by the APAC region with 12%. Europe instead has remained fairly stable. 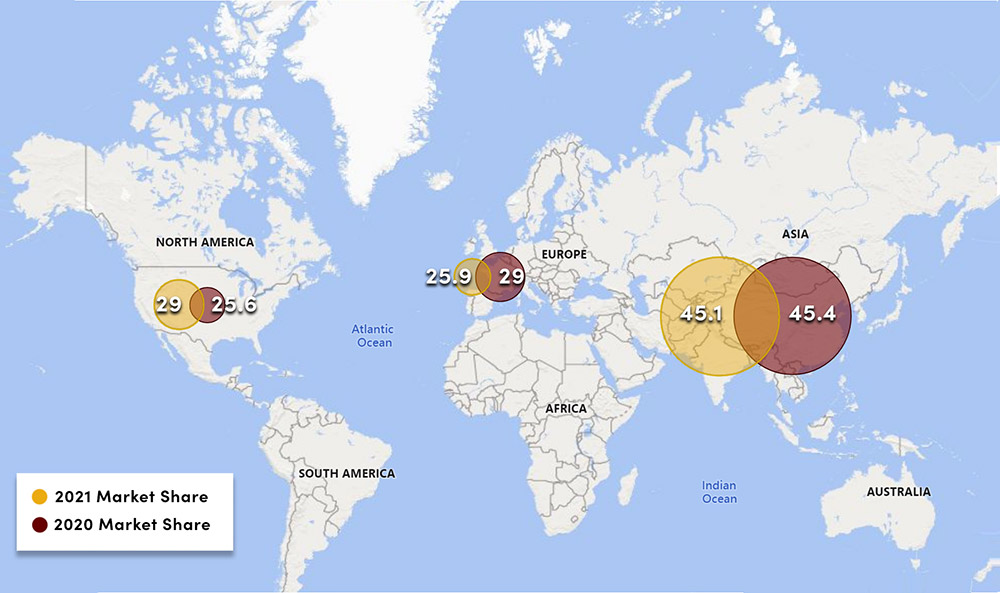 WHAT WE KNOW SO FAR AND SOME OBSERVATIONS

Numerous Taycan owners report benefits of the EV ownership, going way beyond the initial purchase incentives. Several, especially when it comes to everyday use, report they do not see themselves ever switching back to an ICE car.

Porsche is releasing the EVs and the market has responded. Confirming that, as far as everyday cars go, the big shift to electric powertrains could come earlier than expected for many buyers. The combination of novelty, reduced ownership costs, good driving experience, and overall convenience are driving customers faster than some anticipated in certain countries.

So, following the market trends, the next EV by Porsche will be the smaller SUV Macan, likely coming in 2023. What is even more interesting though is a rumour started by a report of Car and Driver from a few weeks ago. It is said that the next in line for the “electric powertrain treatment” would be the 718 Cayman/Boxster, coming by 2024 and somehow teased by the Mission R seen at the Munich IAA show. This choice does not just make sense but could turn into a huge hit, for different reasons.

The 718 range has been stagnating for quite a few years now. Giving it a complete restyle, bringing it up to the most modern standards with new technologies and powertrain seems the best opportunity to shake up the segment bringing new interest especially in new generations.

The report quoted before claims that in China (Porsche’s biggest market by far as seen in the graph above), the average 718 buyer is around 31 years old. So, delivering an ‘affordable’ sports car that looks to appeal specifically to this generation could be the best strategic move to save this segment.

The second reason why a full-electric 718 could be a big hit is that effectively, as of now, there are no true competitors. Porsche, according to this rumour, would be focusing much of its efforts on weight reduction, with a 1655 kg target, significantly lower than the average current EV, while still delivering power close to the 911’s line. In Zuffenhausen though, they are not afraid of product cannibalisation because the two cars along with offering completely different technologies will also be marketed for different audiences.

If Porsche manages to release a similar vehicle in just over two years, it could really come to the market with few to no competitors and a product that significantly rejuvenates this segment.

Porsche Ventures, the venture capital division of Porsche AG, has invested in iMaker, a Chinese startup specialised in the development of digital influencers and ecosystems. This is another initiative that shows its focus on the Chinese market and the new generations, but also its forward-looking attitude and which, has been perfectly expressed by an Italian automotive journalist who said: “Porsche has always been a company that sees the world five minutes ahead of anyone else”. President and CEO of Porsche China Jens Puttfarcken statement reflect this very concept too:

“In its role as a traditional sports car manufacturer, Porsche has always been the driving force behind change and innovation. We want to remain at the forefront of the automotive industry as we move into the digital age. The investment by Porsche Ventures is an important step in implementing our digital strategy and the start of an extended partnership with iMaker”

The strategic investment aims at creating an ecosystem to improve the user experience in future Porsche’s digital interfaces within the vehicles. The collaboration should contribute to providing new digital products and services and improving the overall digital journey. 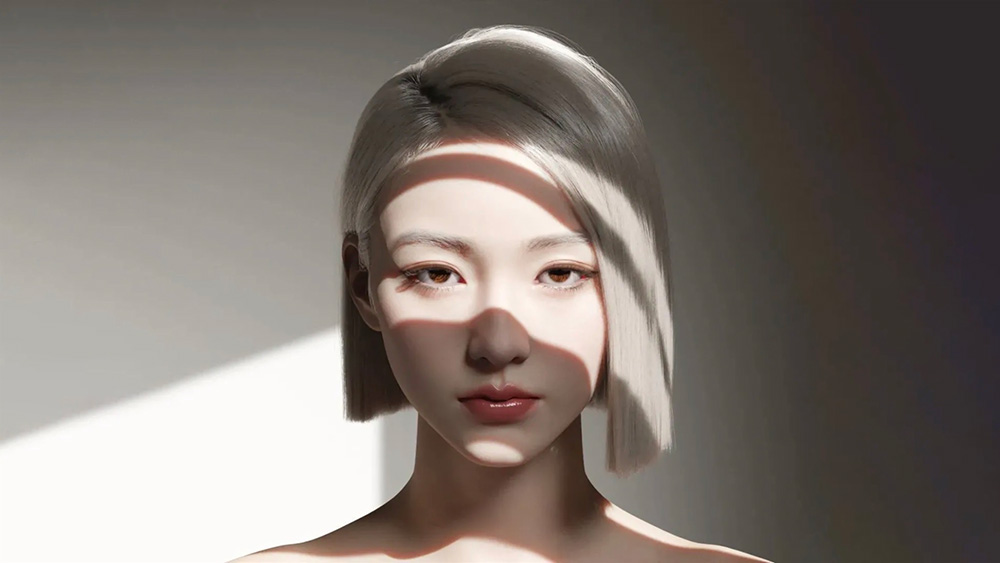 Interestingly, digital influencers have been a growing trend for quite a while in Asia, started in 2007 by Japanese Hatsune Miku. They are digitally-created avatars, often (not always) with extremely photorealistic appearance, and used for product and events promotion, as well as a number of other marketing activities. This is significant as it has the potential to change a huge market. A survey on a sample of 10,000 Chinese users (2021中国虚拟偶像消费市场调研报告) reports that over 60% of the audience is willing to accept purchasing suggestions by virtual idols. A similar research by iiMedia Research 艾媒咨询 estimates this market core value at CN¥3.46 billion (£393 million).

While this, like other recent digital trends, could be one that catches the Asian markets but fails to do the same in the west, if it does gain momentum, could change the structure of the consumers’ digital experience translating in significantly lower costs for brands.

So, it seems highly unlikely even to imagine, in a few years, to be greeted by an AI upon entering a Porsche. Something that already happens on some Chinese vehicles. Nonetheless, it will be interesting to see how iMaker, being so exposed to new digital trends, interprets the future digital experience for Porsche. 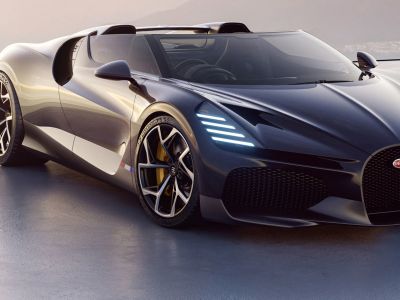