6 Factors to Relaunch the brand: Aston Martin and Mercedes Agreement

In the latest press release published by Aston Martin, the automaker announces its report for Q3 of 2020 along with the renewed partnership with Mercedes-Benz AG through a new strategic technology agreement and new financing. 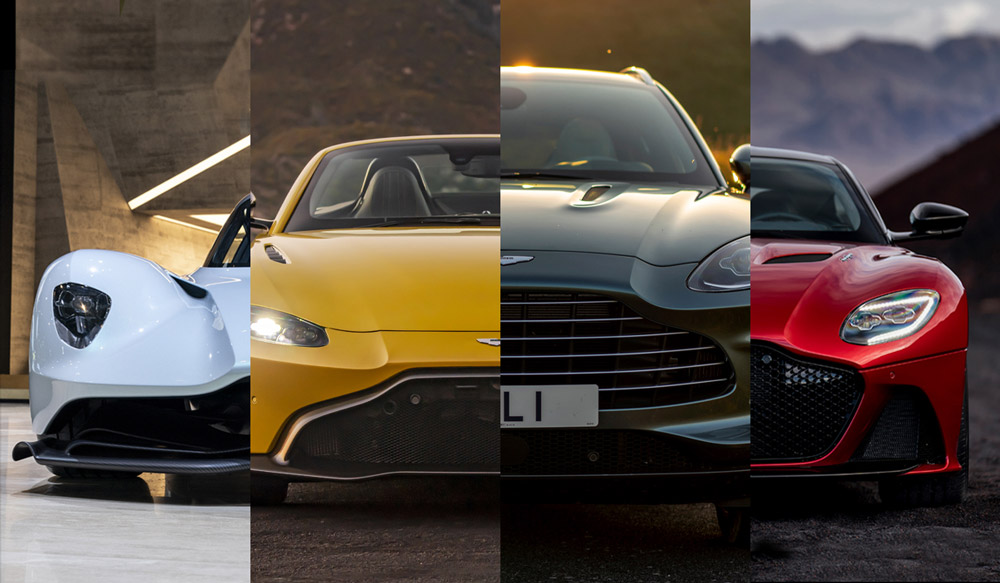 The new agreement stands on the one established first in 2013. Since Lawrence Stroll became one of the major investors in the company and Executive Chairman, there has been a significant restructuring within the company. The main step has been the appointment of a new CEO substituting Andrew Palmer, previous Mercedes-AMG CEO Tobias Moers. If you would like to know more about him, what he has done so far, and the changes in Aston Martin you can check my previous article New Aston Martin’s CEO: Who is Tobias Moers.

According to the press release, the main targets stemming from this new arrangement are the production of 9000-10000 vehicles by 2025, revenue of £2 billion, and Adjusted EBITDA of £500 million.

But how is Aston Martin planning to achieve all this?

Aston Martin will issue £125 million of new ordinary shares, plus £286 million of Consideration Shares to Mercedes-Benz, so-called in the document as part of the agreement for the technology the German automaker will provide. Such shares will be issued in tranches along with the delivery of the promised technology upgrades, with the first coming by the end of 2020 already, the second by early 2022, and the remaining within early 2023.

Along with these measures, debt financing will be raised too through a first lien note issue for £840 million with 2025 maturity, a second lien one for £259 million maturing in 2026, and an £87 million revolving credit facility with 2025 maturity.

Both equity and debt issues should strengthen business resilience and support its growth strategy.

With the new Strategic Cooperation Agreement, Aston Martin for its new generation planned up to 2027 will have access to the latest conventional, hybrid, and full-electric powertrains, “State-of-the-art” electric/electronic (E/E) architecture, hardware, and software. 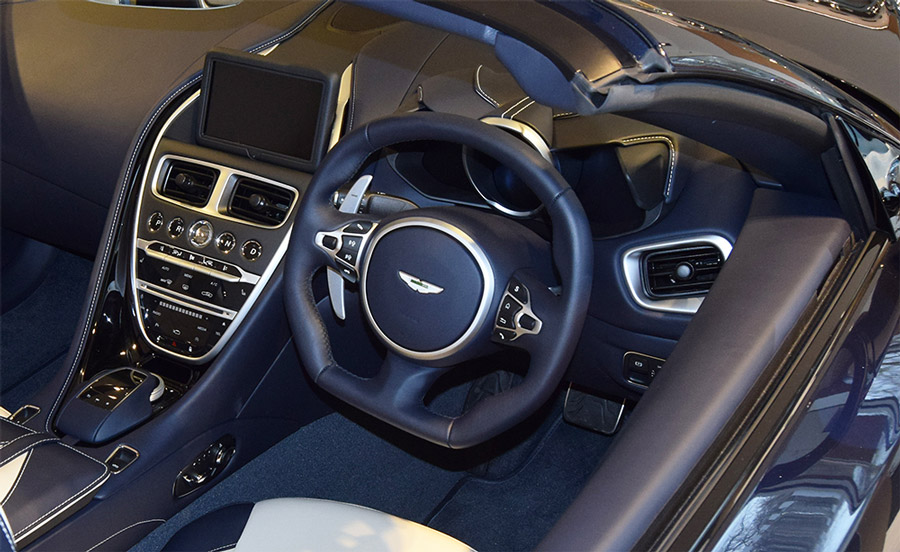 This could be a big deal, since, under the current agreement from 2013, Aston only had access to the older generation of Mercedes’ electronic components, which is something that some customer seemed not enthusiastic about. The fact that now Mercedes has a much more relevant economic interest in the company and the transferred E/E technology is defined as state-of-the-art, could indicate that the latest component will be used by the British automaker too.

A second hint about this, and its importance stressed multiple times within the press release, is that this technology transfer will drastically reduce Aston Martin’s risk. Avoiding in-house E/E components production, all its resources will be focused instead just on new vehicles’ development and other areas of the business that contribute to making the car unique to the brand. 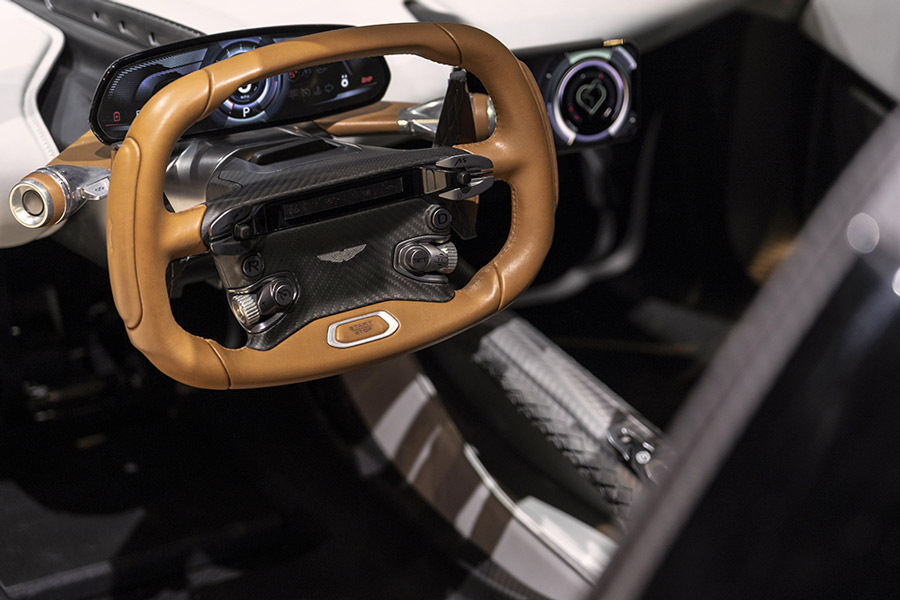 As mentioned in previous articles, part of the updated strategy and renewed business model was the dealerships’ de-stocking in order to balance demand and supply and reposition the product line as that of a true luxury marque. 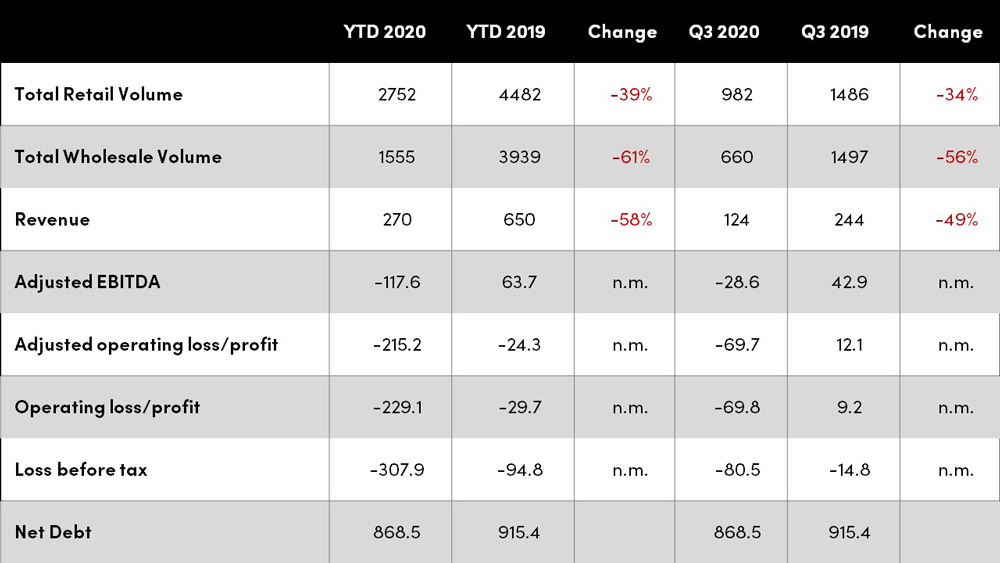 Despite the negative financial results, especially if compared to 2019 which was already a tough year for the company there are some factors to highlight. Naturally, the major cause of disruption in 2020 is Covid-19, and as the numbers of infected increase in many countries, it could still seriously worsen the market condition in the last quarter. Nonetheless, there are positive signs. First of all, the significantly lower wholesale volume, compared to 2019 both in the YTD and Q3 columns, are due to an effective de-stocking that reached over 1400 vehicles. So, a ‘necessary evil’ in this case.

Then, some national market improved more than others. Compared to Q2, China in Q3 experienced a +29%, which even starting from a low basis is still a noteworthy result. Third, even with the overall negative result, Q3 was an improvement over Q2. Of the total de-stock, 567 have been delivered just in Q3, which represented an acceleration, and operating loss was also lower than in the previous quarter. Finally, there was considerable debt reduction.

It has been said many times now that the SUV DBX is extremely important for Aston Martin. As of now the St. Athan plant, which has been created exclusively for the production of this vehicle (as further proof of its importance), has reached the full rate of production again. Also, in the press release CEO Tobias Moers mentions a “quality-led ramp-up as appropriate for our luxury product positioning”.

The YTD column shows GT is the most successful category in Aston Martin line-up both in 2019 and 2020. But in Q3 DBX was by far the best-selling model with 345 units alone. This figure confirms the ‘solid order book’ mentioned previously by Mr. Stroll and represents a positive outlook for the coming months.

After de-stocking, Aston Martin will implement a “disciplined production to order to generate a margin more aligned to the luxury automotive segment”.

The production target set for 2025, will include front-engine, SUV, and mid-engine vehicles. The newly introduced mid-engine line already counts Valkyrie which will be delivered from half of 2021, and Valhalla set to arrive in the near future as well. A third production model that should not be limited will be the Vanquish Vision presented at the Geneva Auto Show 2019.

The SUV line could be expanded as well with other models complementing the new DBX. Hybrid powertrains will account for 20-30% of Aston Martin production by 2024 and the first full-electric should arrive no earlier than 2025.

Lawrence Stroll’s F1 team Racing Point (already powered by Mercedes engines as well) will go under the Aston Martin brand from the 2021 season. This move will bring significant benefits to the automotive business with a rare model that just Ferrari and McLaren have enjoyed so far.

A successful Formula 1 team represents a powerful marketing tool, and the support by Mercedes, which has dominated the turbo-hybrid era of the sport, surely gives a relevant advantage. Additionally, from next year, 4-time World Champion Sebastian Vettel will join the team too bringing with him his strong popularity as 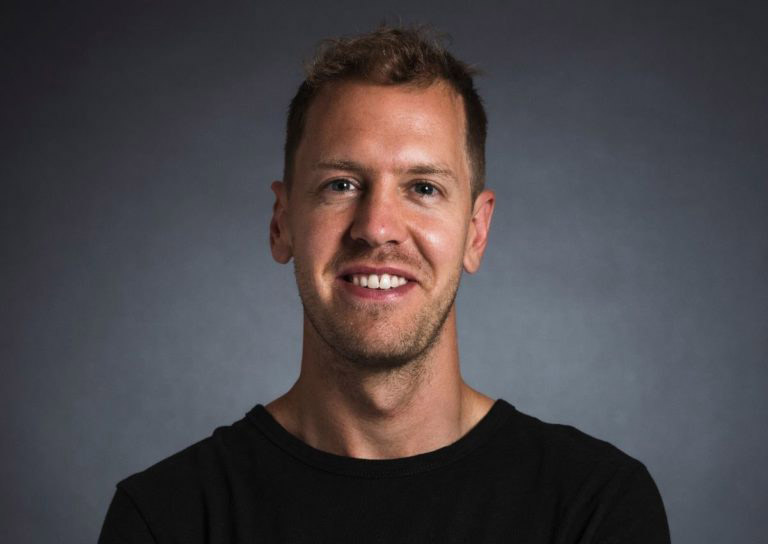 one of the most successful and respected drivers in the sport’s history.

The second, but potentially even more important, benefit of a Formula 1 team activity is the technology transfer that will be available for the automotive business’ mid-engine vehicles directly from the racing cars. This is something that has happened for quite a long time now, and with the new FIA regulation coming in 2022 new innovations could stem from it. 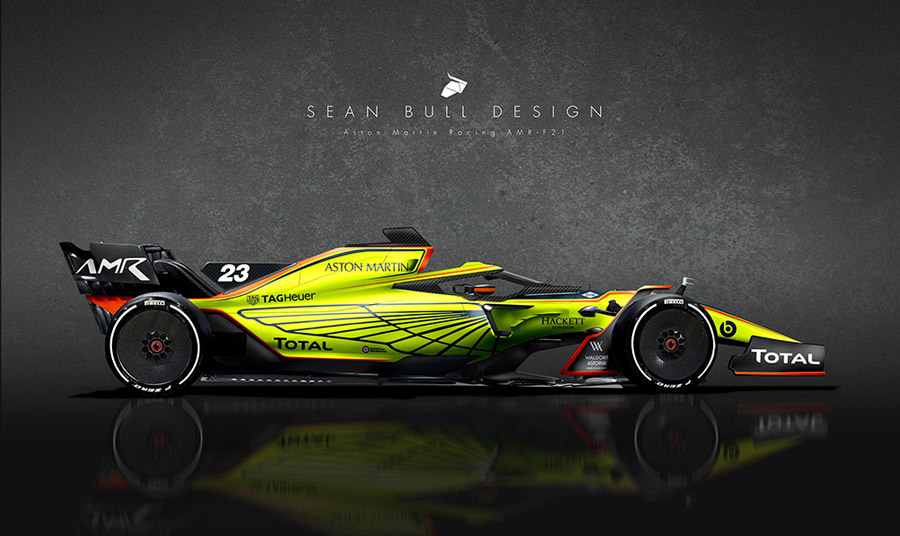 The comprehensive plan and the closer ties with Mercedes, which has been extremely successful in the last few years in many automotive segments, look like the best recipe to reposition the brand, shield its products from depreciation and ensure sustainable growth and innovation aligned with the current market changes.

However, after a partial recovery, there is still much uncertainty around the Covid-19 progression, with various countries re-establishing restrictions and lockdowns. A second drop in sales and financial markets confidence is plausible, and while on one hand, the consequences could be even more severe than the ones experienced before, on the other some effects are now already known, and serious infrastructures and measures are already in place. Overall the outlook should be cautiously optimistic.