A few days ago Lamborghini has finally revealed its NFT project teased in December. it is one of the most creative, if not the most creative one seen so far in the automotive industry, with one important twist. And, as imaginable, it was a successful one as well, with all the five NFTs selling for a total of around $659,636.

As discussed a few weeks ago, when I introduced the topic in the article NFT in Luxury automotive: Ferrari and Lamborghini jump in, Lamborghini along with Ferrari is just the latest of an increasingly long list of automakers and high-profile brands to enter the NFT space. However, the non-fungible tokens' market is still in its infancy, and for as much potential it has for the future, there is still a lot of uncertainty regarding the legality of many initiatives that pop up daily on the internet. For this reason, there is still quite a lot of hesitation from the public, especially that share of people not into new tech, or the Web3 concept. 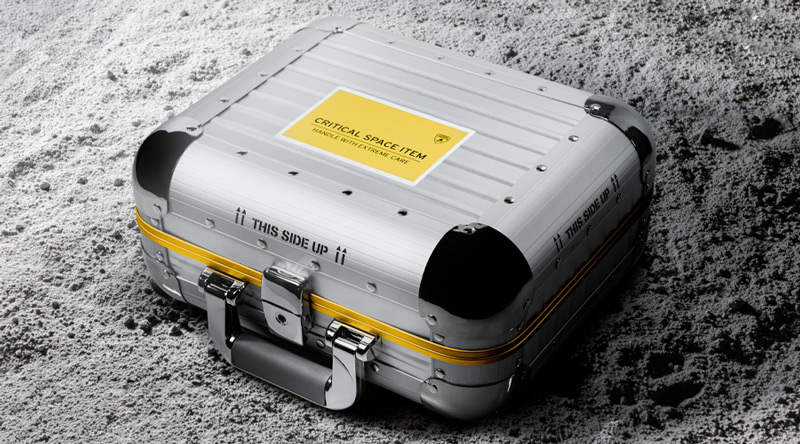 Lamborghini as many others does not seem to have any doubt about the future of this technology but actually bets on it with an innovative approach that no other automaker has matched so far.

So, how is the NFT space developing? Why Lamborghini would want to enter it? And how is the Italian brand setting itself apart from the competition?

Despite all the uncertainty, the NFT market, like the rest of the blockchain-based technologies, has grown exponentially in these two years of pandemic, especially in 2021.

While according to a report from Reuters, the volume in 2020 reached over half a billion US dollars, in 2021 different platforms reported sales volumes all in the order of several billion. Chainalysis though claims that this market also suffers from significant trade washing. Meaning that buyer and seller is the same person completing a transaction from two different wallets. This, as it happens with cryptocurrencies, is done to deliberately drive up the trade volume of a specific asset or crypto eventually increasing its value. While according to the analysis a sizeable amount of profit was realised by trade washing NFTs (over $8.4 million) this has probably not impacted as much the overall token-related crypto transactions’ volume set at $44.2 billion in 2021. NFTs’ largest platform OpenSea also went back and forth on its unlimited NFT minting tool as it is has been prone to misuse.

*Data are for ERC721 and ERC-1155 NFT Contracts (from Jan to Dec) Source: FT via Chainalysis

The sudden growth in transaction volume over the summer from July and August on, up until December when it slowed down significantly could have different explanations. One could be the general amount of disposable income left by the pandemic’s impact especially with travel restrictions, as discussed in Why 2021 was a record year just for Luxury Automotive, which positively affected the luxury automotive market too.

Lastly, according to other sources, this sudden interest would have been driven by a few popular collections such as CryptoPunks, traded over 2,800 times in August alone. This data is interesting when put into the general context of the NFT market.

Its structure gives an interesting indication of its current direction. The graph below shows the best-selling categories over one month between December 2021 and January 2022.

Number of NFT sales in popular categories over 1 month period

This data indicates the current speculative nature of the NFT market, but also a sizeable volume of different segments that will be interesting to follow in the coming years, as awareness and new ideas develop.

How Lamborghini got into it

In December Lamborghini teased its new project through the hashtag #ToTheMoon. And indeed, with an attitude always projected into the future, it was aiming there. The automaker partnered up with Swiss artist Fabian Oefner, already famous for his photographic work, his colourful pieces created through scientific processes (such as magnetism used with specific liquids) establishing a direct connection with nature, and his cars disintegration (figurative). The latter consisted of high-quality models dismantled with each component carefully placed to simulate the car exploding. The same effect is reproduced in Lamborghini’s project too, but with real car components. 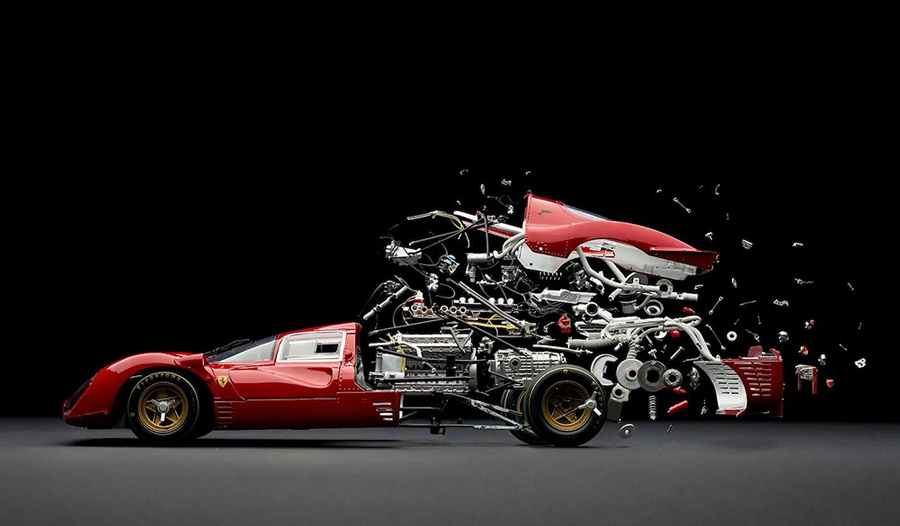 With regards to this idea Oefner said:

Lamborghini collaborated with NFT Pro and auction house RM Sotheby to develop the project and start the bidding for these NFTs on the first day of the new lunar year. February 1st.

But the references to the moon and space exploration do not end there. Each auction for one of the five NFTs created lasted 75 hours and 50 minutes, matching the time it took the Apollo 11 to reach the moon’s orbit.

Oefner realised five images of “exploding” Aventador Ultimae with the same principle as before. These however are set in space. The picture background is photographed by a weather balloon sent to the stratosphere. Then the artist crafted each image from over 1500 shots of single car components. But here comes the most interesting part of the whole project. The one that makes it unique and sets it apart from any other NFT released by other automakers.

Lamborghini paired each image with a physical object called “Space Key”. Each Space Key is actually a carbon fibre piece that was sent to a space station for research in 2020. Once back, they have been engraved with a QR code that links to the digital image. 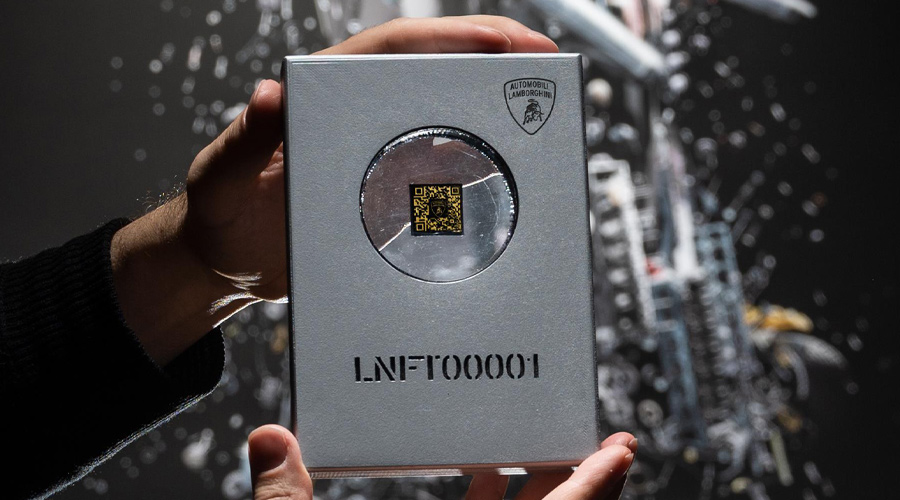 Finally, each auction that exceeds a certain value, will be accompanied by a Samsung 65’’ TV with a wide-screen image of Oefner’s artwork, his original signature, and customised TV frame.

What it means for the brand

Lamborghini found a brilliant way to bridge the digital asset and the physical unique item. It managed, in one single move, to reiterate its uniqueness, and create something that will not only appeal to tech enthusiasts, but also to other audiences that are approaching NFTs and will be much more likely to show interest in a project that includes an extremely rare physical piece. In this case, a key to “open” a beautiful artwork.

This project can benefit Lamborghini in different ways.

First of all, it is a communication masterpiece. As said by the artist: “The Ultimae is no longer a car, it has transformed into a rocket, reaching for the stars”, and this is pretty much what Lamborghini is about, what it should feel approaching this brand. In this era of automotive transformation, Lamborghini has more than ever the opportunity to be that “trendsetter” it claims to be in its publications.

As NFTs’ popularity increases, this project will most likely remain as a great example in the minds of many, and not just car enthusiasts. So, it could even strengthen its image in the eyes of a wider audience. 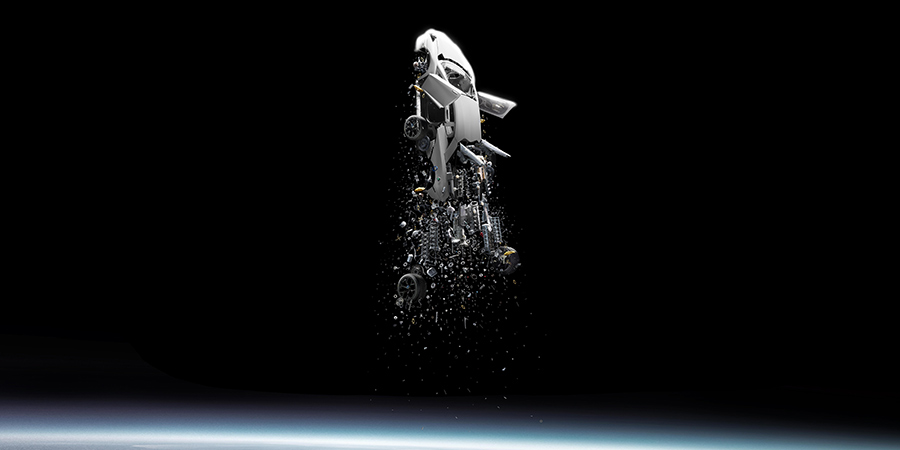 Secondly, the project was pretty successful. Of the five NFTs sold, the top bid reached around $203,636. Considering it was the first auction and only the first “drop” (there will be more), they will most likely appreciate in the future. Even though the NFT sales that make the news are the multimillionaire ones (and there have been quite a few by now), the vast majority of them goes for a few hundred dollars.

As automakers increasingly diversify with complex strategies that include ever more touchpoints aimed at improving the brand’s reach, NFTs represent a unique opportunity. Especially for luxury and aspirational brands. As fashion apparel or limited edition items for clients are now important strategic tools for most automakers, NFT can quite easily become one too in the future, bringing the additional benefit of the appeal to younger generations.

The first NFTs corresponding to physical art pieces came out a while back (Damien Hirst paved the way), but while Lamborghini has not been the first to develop such a concept, it surely executed it in a creative way giving birth to a very rare digital and physical asset.

This first foray has been a remarkable example of how NFTs can become powerful marketing tools. And this one has been realised in the most “Lamborghini way” possible, strengthening its message and identity.

Its success further proves this new platform’s potential, and the uniqueness of the approach that distinguishes Lamborghini from the competition even beyond its supercars. But this NFT drop also demonstrates how we are moving into a new era and gives a hint on what this space can become once it matures and sheds all the unnecessary, speculative appendages.