Pretty much everyone by now has seen the spy shots of Ferrari’s upcoming SUV (or FUV for Ferrari Utility Vehicle) Purosangue leaked a few days ago, way ahead of its launch. Just a few days later the automaker, as expected, reported record results for 2021. Sales have increased from the solid 9,119 units of 2021 to an all-time high of 11,155. Financial performance has been positive as well with revenues increasing by 23.4% as did all the other figures reported in the Financials section.

Differently from other automakers that have a rather balanced presence in each continent, Ferrari sells a much larger share in the EMEA region, which accounted for almost 50% in 2021. 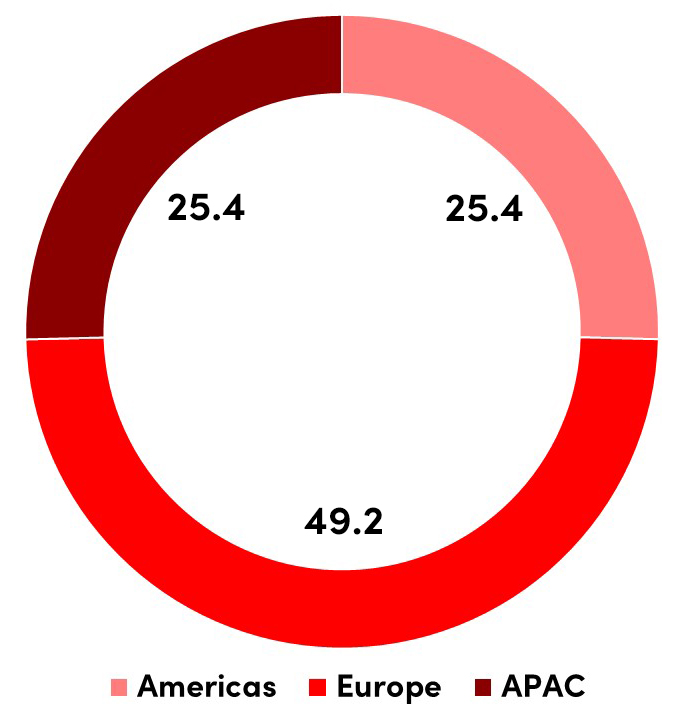 In this context, the general assumption is that considering the continued strong performance of the SUV market, Ferrari too will access a new demographic that will contribute to further raising the Prancing Horse’s sales. Estimates for the period between 2022 and 2023 vary from a somewhat conservative 15,000 up to a probably overly optimistic 20,000.

By looking at what Ferrari’s competitors have achieved so far thanks to their own SUV models, it is easy to understand the optimism. As shown in the graph below, all the luxury SUV models released so far since their launch have accounted for almost half of the total sales (and even more in the case of Lamborghini). Not only that, but of these four direct competitors, Lamborghini Urus, Aston Martin DBX, Rolls-Royce Cullinan, and Bentley Bentayga, the first three have pretty much consistently doubled their automakers' yearly sales. The only exception seems to be Bentley with the Bentayga, where over the first 4 years since its launch in 2016, the overall sales remained quite stable, meaning that the SUV had probably cannibalised part of the other models’ sales. 2021 however, with a modern and up-to-date range was a great success for the British manufacturer that increased its sales by a significant 31%. This made it the highest seller within this market niche by quite a margin with 14,659 units delivered, and also signalled a good success for all the three models of the range, Bentayga, Continental GT, and Flying Spur.

Percentage of SUV units sold against total sales by Automaker 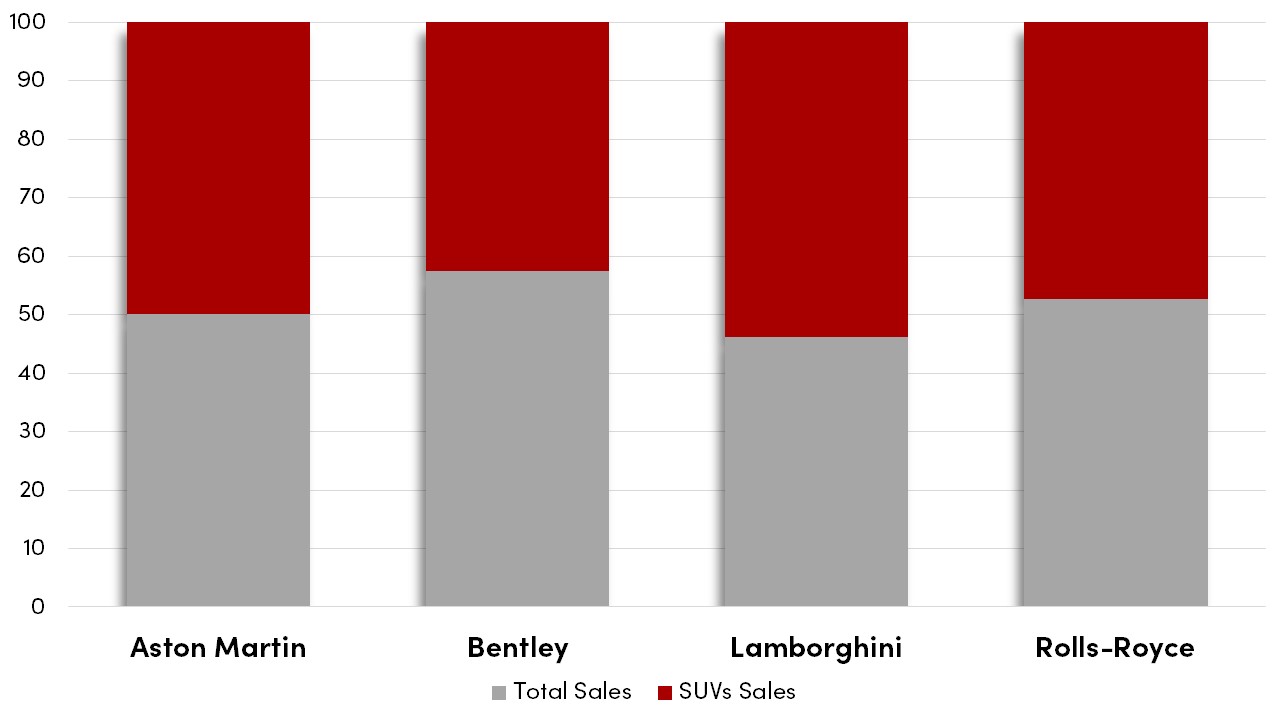 It is easy then to see why the Purosangue is expected to quickly become a best-seller. Just the two spy shots created a huge ripple effect throughout the internet for the novelty of an iconic brand like Ferrari going a different way with an SUV, even though it was already known. So, it is safe to say that when the actual production-ready vehicle comes out it will attract even more attention.

Purosangue by name and by nature

One trait, possibly even be the most important one, that will have to distinguish the Purosangue is that it will have to feel and drive like a Ferrari. Words spoken way earlier by Sergio Marchionne in an interview with Top Gear and reiterated many times after. The name itself meaning Thoroughbred is a clear indication of that.

Enzo Ferrari said: “I don’t sell cars. I sell engines.”. So, Ferrari started from the engine. The Purosangue, substituting the shooting brake line of FF and GTC4 Lusso, in its first iteration will feature the naturally aspirated V12 proper of all the top-level front-engine Ferraris. This will already separate it from the competition which has mostly adopted the turbocharged V8, with the exception of Bentayga’s W12, and Cullinan twin-turbo V12 which is certainly aimed at a different demographic.

Later versions, likely featuring the Turbo Hybrid V6 seen in the 296 GTB will also be offered. Apart from engine details, it is known that the car is based on the Roma platform which makes the project more cost-efficient and will have rear-hinged doors in the back but there is not much more for now about the most important factor, its dynamics.

If Ferrari does significantly increase its production number will it lose the small volume manufacturer (SVM) status? The simple answer is no. At least in the short term. But here are a few details.

Similarly, for the European Commission SVM or Niche Car Manufacturer can apply for a derogation on emissions target. The difference between the two is that the first includes all the automakers that sell less than 10,000 vehicles, while the second accounts for those counting between 10,000 and 300,000 registrations. While not specified in the text, the definitions refer only to registrations within the EU as both Ferrari and Bentley are listed as SVM.

What about the risks of diversification

In every new venture or new product line expansion, there is a certain degree of risk.

In this case, the one risk quoted most frequently is that Ferrari might be too late in the segment where its competitors have literally been selling thousands of vehicles for the most part of the last 4 years. While this seems unlikely, there is still the possibility that somehow Ferrari could sell significantly fewer SUVs than expected.

Nevertheless, thanks to its current strength, Ferrari’s strategy itself hedges the company from this risk. Its 2021 annual report (as the ones before) state:

“…our current growth strategy contemplates a measured but significant increase in car sales above current levels as we target a larger customer base and modes of use, we increase our focus on GT cars, and our product portfolio evolves with a broader product range.”

Or as Ferrari Commercial and Marketing Senior Vice President Enrico Galliera told Autocar, Ferrari’s current growth does not rely on selling higher volumes of the same models. For this reason, they will proceed “without pushing a single model” but expand into new and higher-end segments like it has been for the SF90 which is around 25% more expensive than other production models.

This should not only shield Ferrari from losing exclusivity but also offer relative protection from a single model’s potential poor sales. Differently from what could happen to Aston Martin that relied and is relying much more on its DBX’s success. So, as it happens for all the other production models, Ferrari will deliberately limit the sales numbers of the Purosangue against its demand. 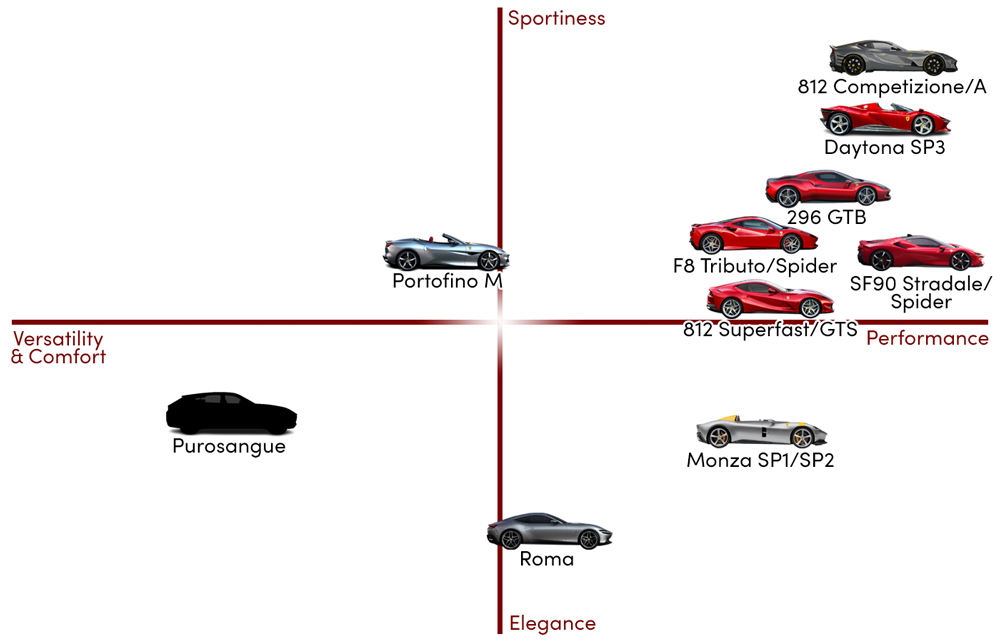 Going further this product diversification, which could also be called just expansion if compared to recent Ferrari ventures like the Ferrari Style fashion line, comes through internal development in a related niche. This means that Ferrari already has the core competencies and set-up to succeed, and does not need significant acquisitions to approach this new segment.

Also, its value chain contains competitively valuable cross-business relationships. Thanks to shared platforms costs, expertise, and resources can be shared too.

Lastly, there is one potential liability stemming from Ferrari’s recent activities in GT cars range expansion and brand diversification. The loss of focus from both a production and marketing perspective. While it is early to talk about it, moving in many different directions and stretching the resources over several models in a complex product line could eventually have a detrimental effect on the brand image and reputation.

Already in 2019, Ferrari has started a process of diversification in various directions, and so far has been very successful in its effort. As of now, there are no signals, either from the company’s strategy or the market trend, suggesting that the upcoming SUV Purosangue could deliver poor results or be received badly from its audience.

If any difficulty might arise that will most likely be in the long-term if Ferrari’s strategy results to be too ambitious and overreaching.